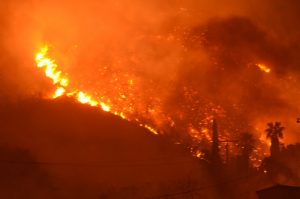 If radical environmentalists had their way, Montana could be ablaze.

In March 2019, the MWF—which claims to be a conservation group—sued to block the agency’s plans for thinning, logging, and controlled burns near Helena. The Forest Service project is designed to help fight fires, protect firefighters, and protect Helena’s water infrastructure.

Why is the Montana Wildlife Federation trying to stop a project that will help conserve Montana’s lands from devastating wildfires?

Look at the massive wildfires in California in recent years. The 2018 wildlife seasons was the most destructive ever recorded in the state.

Environmentalists are pouring millions into Montana groups like the Montana Wildlife Federation that appear to be moderate and sportsman-friendly. These environmentalists want to shut down all logging, mining, energy development, and other jobs-creating activity.

Groups like the Montana Wildlife Federation lobby the legislature along with filing frivolous lawsuits. MWF is lobbying the legislature on Wilderness Study Areas. Their agenda is to keep these lands locked away from human use and enjoyment as much as possible.

You can help expose this. Click here to find out who these Montana “Green Decoys” are. And share this information on social media.